We start our Day of Atonement with a strange request, one which even comes in different formats and one which has caused much confusion, not to mention hostility from those who always seek an excuse to be hostile. The 'Kol Nidre’ prayer is a request to God to forgive either the sins we have committed, in the past year, or the sins we will commit, in the coming year, by making promises and commitments which we then broke – or will break. The first version seems to be a 'catch-all’ that seeks to wipe away past debts – at least moral debts; the second version seems to be like writing ourselves a blank cheque (if anyone here remembers cheques!), giving ourselves unlimited credit so that we will not have to worry seriously until the year is over – if then – for we can always repeat it, yes?

Those who want to believe that Jews always break their promises find this prayer to be the perfect material for their claims; on the surface it truly is, even if – as we are often reminded – everyone else breaks their promises as well. This cannot however be a justification for us.

There are articles and commentaries enough on the text in its different versions; most rabbis would point to its origins as a way of allowing those who, for whatever reason, had lapsed from the faith, to return to it once again, to be accepted into the congregation even if they or their ancestors had drifted away, had accepted a forced baptism, had left their Jewish homes, had become wanderers in a secular or a heretical world. The idea is that this was a plea to God to forgive the neglect of promises made to God, not to other people. The Rabbis insisted that during the Ten Days of Penitence, the Asseret Yemei Teshuvah, one has opportunity to try to put right what one can in terms of broken relationships and broken trusts with Other People, to repay the debts, to return the loans, to repair the broken, to restore the lost; Then on Yom Kippur we have the opportunity to do the same with God. The Hebrew terms are ”Beyn Adam veMakom” – not just ”Beyn Adam veChaveyro” – Between a Person and God, not just between a Person and Other Persons. 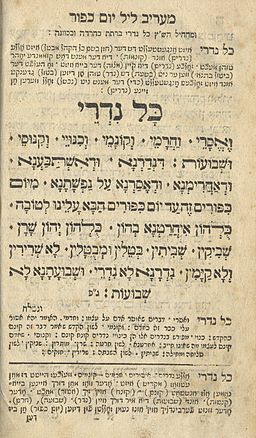 It is an important idea, but I would like to suggest a further refinement. There are many who have great difficulties in the idea of God; But do we believe in Ourselves?

What about the promises We make to Ourselves? The resolutions we make? To care more for our health, to work better, to be more consistent, to lose weight, to exercise, to study, to pray more? To be faithful and loyal?

I stress that we do not seek Perfection. Humans are not and never can be ”perfect”; we are made in a certain way, there will always be fatigue, illness, bodily secretions, sensitivities, temptations; Concepts of Perfection are also highly dangerous, for they rule out any possibility for further development. Furthermore we have learned many times that people who believe in Perfection and in perfecting other people never find this perfection and therefore turn to hate those other people who, they feel, have 'failed’, have 'let them down’, have 'not appreciated the aim, the vision’ – and so they try to destroy these others. These are dogmatic Ideologues, not people with faith and with tolerance for human variety and human frailty.

So let us be realistic. We will not become Perfect, but we CAN become Better. There is no excuse to become apathetic and say, ”Well, I will never manage to avoid all sins, so why should I bother trying?” No, each day brings new challenges; some of them maybe harder than others but all of them confront us with moral choices. It may be that we will attempt to improve ourselves, bit by bit – and sometimes we will hopefully succeed, but sometimes we may fail; We may not only fail, we may even slide backwards! At such a moment we will need encouragement, support, the help to try again.

I believe it was the Irish playwright Samuel Beckett who said:

This is a good aim, a realistic aim, precisely because it places limited and not unlimited demands upon us. It challenges us but in a way that we, as humans, can cope. Or should be able to cope. However, it means admitting the possibility of failure before we even begin; It means accepting that we may not reach our aims, even before we set out. It means being modest – but determined nevertheless to do our best.

And if this is the context, then the words of the Kol Nidre are relevant and helpful.

In the coming hours much lies ahead of us. We shall – unless we have good health reasons not to – be fasting, deliberately trying not to diet, not to lose weight, but simply to learn to do without, to concentrate less on our stomachs and more on our souls. Because we are probably not very accustomed to this, there will be initial discomforts – as with any exercise, whether a physical or a spiritual exercise – but these will pass and in any case the period (for us) is limited.

There will be many prayers and some of them come only once and some of them will be repeated. Why repeat them? Some things grow and go deeper with repetition, they do not become blunted, they do not become routine, they become a part of the way we think, when for example we call to ”Avinu Malkenu”, ”Our Father, Our King.” These words remind us that we are but children, that we are but subjects, that although in the modern world it is fashionable to be proud of autonomy and independence, we are indeed still mortal, and it is not we ourselves who define our limits.

There will be chances to read and think, to study and to contemplate. There will be opportunities to join in as the entire congregation sings or reads, and there will be opportunities to 'switch off’ and follow our own thoughts, to gather up our own regrets, to remind ourselves of our own memories, of things done and not done – things that are and that should remain intensely personal, not to be shared with any other people – but only with ourselves, and with God. There will be times we can read aloud joint confessions – ”We have sinned, we have failed…” and by doing this jointly, together, in the 'We’ form, we can avoid personal embarrassment whilst at the same time giving our tongues and mouths the ability to formulate what our mind is feeling.

There will be opportunities to consider how the system of sacrifices used to work in former times and to consider what we ourselves would be prepared to sacrifice, and how.

It may be that, by the end of the day, this time tomorrow evening, you will feel, ”I didn’t manage it all, I didn’t concentrate enough, I didn’t succeed – I MEANT to pray better, to think deeper. I meant to stay awake. I meant to read it all.” This is quite possible, Don’t worry. If the Kol Nidre means anything, it means that we acknowledge that we cannot always manage to achieve our aims – but at least we have those aims.

And next year – if God allows – we can try again. Better.